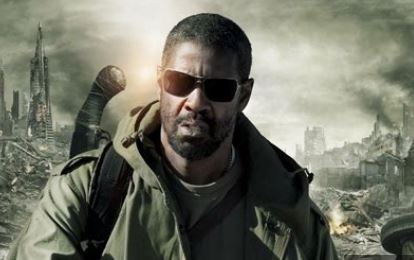 The Book of Eli is a 2010 American post-apocalyptic neo-Western[4][5] action film directed by the Hughes Brothers, written by Gary Whitta, and starring Denzel Washington, Gary Oldman, Mila Kunis, Ray Stevenson, and Jennifer Beals. The story revolves around Eli, a nomad in a post-apocalyptic world who is told by a voice to deliver his copy of a mysterious book to a safe location on the West Coast of North America. The history of the post-war world is explained along the way, as is the importance of Eli’s task. Filming began in February 2009 and took place in New Mexico.[6]

The film was released in theaters in January 2010. Alcon Entertainment financed and co-produced the film with Silver Pictures, while it was distributed by Warner Bros. in the United States; international sales were handled by Summit Entertainment,[7][8] with Sony Pictures Releasing International distributing in a large number of international territories.[3][9]